Once again on our way to Tokyo. Stopover at Schiphol Airport, spotted our first Japanese influence… 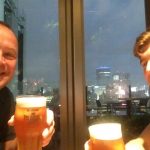 We began our trip with an afternoon nap, then pizza and beer in the hotel bar. Raining heavily in Tokyo, turns out a tropical cyclone is paying us a visit. Mind you, sitting in the bar, looking out at the city, we’re in Bladerunner territory at last. Just needs hovering adverts exhorting us to emigrate to the outer colonies. Weird hotel next door “Hotel W Bagus”, very happy elephants and much neon.

Hairy one at brekkie

Hit our favourite coffee shop Doutor for breakfast. Both of us now firm fans of iced coffee, best thing in this heat. We then walked down through Shinjuku, heading towards Harajuku. Spotted a bread delivery truck (the Japanese have a real love of thick, doorstep slabs of pure white bread, not much wholemeal in this country!). Then saw a coach destined for the world’s only Thomas the Tank Engine theme park – on asking James if he’d like to visit, received an answer that is not fit to be printed in such a genteel blog. 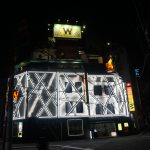 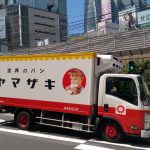 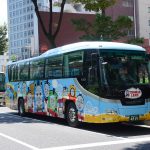 On the way to Shinjuku we stopped in on the Japanese Sword Museum. A small building, currently running a display of the art of the Japanese swordsmith – incredibly finely and beautifully illustrated components of swords – such as the blade guard and decorative elements of the scabbard. Sadly no photos allowed inside.

Grabbed great sushi from a local supermarket for lunch, then had a stroll through Yoyogi Park – cicadas even louder here. After looking around Harajuku, went on to Akihabara (mecca for geeks) to sign James up at a local bouldering centre, B-Pump. 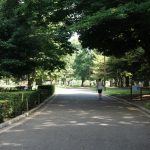 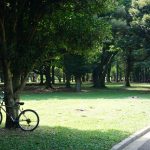 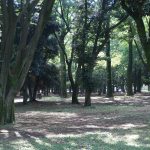 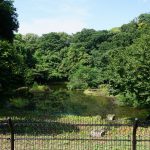 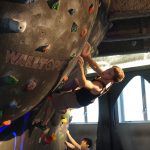 On Thursday we headed to Asakusa to catch the Himiko for a run down the river – a striking vessel styled by a famous Japanese comic book (manga) artist. Opposite the ferry port was the headquarters of the Asahi brewing company. The tall golden building (Asahi Beer Tower) is designed to look like a glass of Asahi, with the white ‘head’ housing a 22nd story bar with great views. The black building next door (Asahi Beer Hall (a.k.a. Super Dry Hall, or Flamme d’Or)) is designed to look like a beer mug with the Asahi Flame on top (the flame was built using submarine construction techniques and weighs around 350 tons). Unfortunately the shape and appearance of the flame have earned it the affectionate nickname of ‘the golden poo’.

Great views, passing the Rainbow Bridge in the harbour, ending up at the Fuji TV buildings and neighbouring mall for lunch. Later in the day, James very relieved to discover his AS exams had gone well…. Late evening beers (with suspiciously familiar beer glasses!) in Shinjuku. After passing Godzilla we were approached by a lady who must have been in her 70’s asking if we’d like to come and watch some girls dance – we politely declined! Turns out we’re staying in an area called Kabukicho, known to be Tokyo’s red light district… 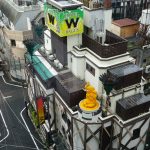 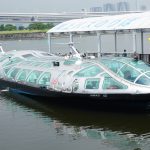 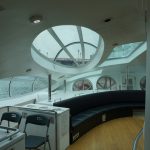 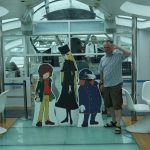 Meet the crew and new recruit 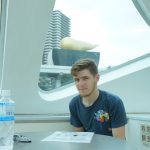 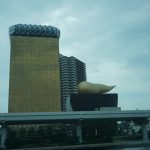 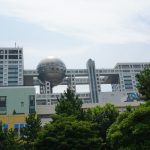 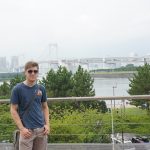 James in front of the Rainbow Bridge 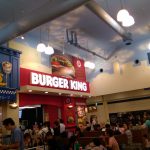 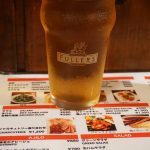 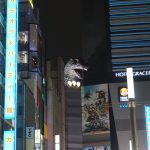 Godzilla at the movies

Return Of The Geeks – Rabbits, roads and a ryokan