Return Of The Geeks – Rabbits, roads and a ryokan Early start – taxi at 4.50am to station, local train to Tokyo for shinkansen to Onomichi. The train on the opposite platform reinforced our image of just how cool Japan can be.

But this reminded me of the quote from William Gibson: “The future’s already here, it’s just unevenly distributed”. Japan is an incredible illustration of this – they have amazing trains and advanced buildings. And yet… They still think fax machines are a good way to do business. Dropped most of our luggage in a station locker, then local train to Tadano-Umi where we caught a ferry to Okunoshima – ‘Rabbit Island’. A YouTube search reveals clips of people being mobbed by crowds of bunnies (http://www.bbc.co.uk/programmes/p02glpjk), but as it was 35degC when we arrived, most of the locals were lounging in the shade.

Interestingly the other thing the island is known for was as a poison gas production facility during the Second World War. Hmm. Theories vary as to where the rabbits came from – some say they are the descendants of test subjects released after the facility closed down. 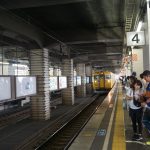 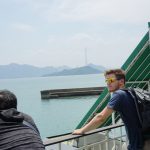 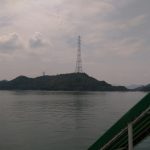 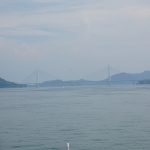 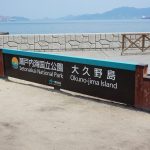 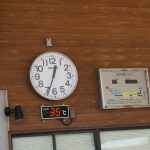 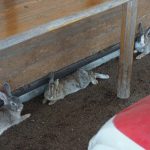 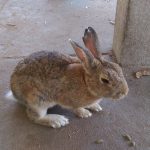 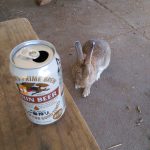 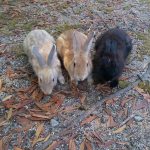 1st bunny seems to be wearing a mask… After exploring the island we boarded the last ferry over to Omishima Island. Checked into our traditional ryokan (Japanese Inn) and headed out for some iced coffees – great glasses! First course uses the higher grade food and sashimi will be served with “funamori” style in which sashimi is placed in miniature wooden ship.”

The cooked dishes were OK (although we both passed on the ‘turban shell’ basically a large sea snail). Sashimi of incredibly fresh red snapper proved to be not to our liking – the texture (dense yet ‘crunchy’) didn’t really hit the spot. Spectacular presentation though!

Next morning breakfast went down well – though still feels odd to be having grilled salmon, fish and miso soup first thing. The karaoke kit was most impressive. 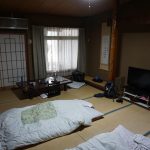 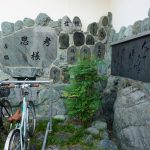 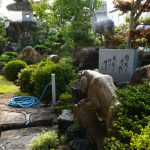 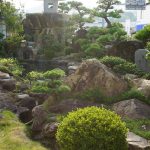 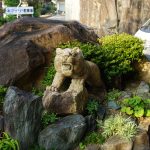 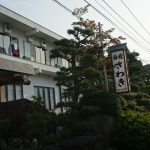 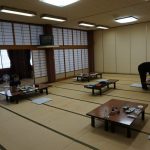 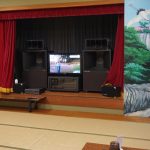 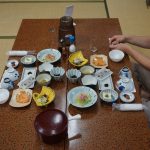 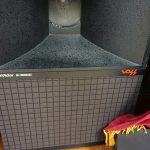 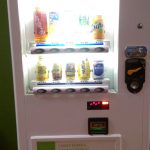 So now to the main event of our weekend. For some unknown reason, I thought it might be a good idea to cycle 40 km along a highway called the Shimanami Kaido. It runs across multiple suspension bridges between the inland sea islands, and each bridge has a separated pedestrian and cycle way complete with sloped access roads. Then looping along island roads next to the shore in between each one.

We got started around 9am, and ended at 1pm – as we got on the ferry back to Onomichi the large thermometer was showing 37degC… Not sure how I survived it but was specatacular scenery – needless to say James was way out ahead most of the time. You will see from the video below just how nice it was to hit the downhill section after each bridge.

Stayed at the Green Hills Hotel in Onomichi right on the harbour. Great views over to the neighbouring islands, and the shower was much welcome after our exertions. Dinner was unexpected – a Google search turned up rave reviews about a pizza place called Tranquillo. Turns out the Japanese chef spent some years training in Italy, and was turning out authentic Italian pizza using a wood fired oven. James’ opinion? “Best pizza I’ve ever had”. 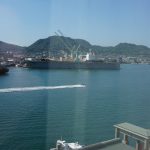 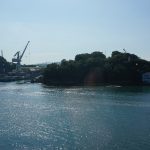 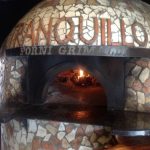