So I decided to get some physical activity in to start my trip off. First: snorkelling! Having never done this before, was looking forward to a new experience, and the views from the boat were promising. 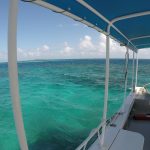 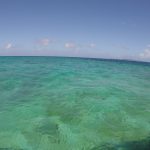 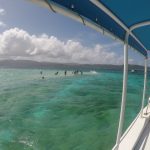 However, my inexperience was to prove problematical. Donned flippers and snorkel, and hopped in to the amazingly clear waters with the others. Sea was a bit choppy, and I couldn’t get the hang of the flippers – looking across at our skipper gliding along effortlessly I struggled to figure out the technique. Anyhow, thrashed about for 20 mins, enjoying the sight of coral and fish gliding by below – at which point I managed to inhale a chunk of the East China Sea. Struggled back to the boat, and spent the next half hour coughing up nasty coloured foam with the ever present taste of salt and iodine – lovely!

I got back in the water an hour later to stand on an ‘island’ (third pic above) called Barasu Island. It’s a bit of a stretch calling it an island – essentially a big pile of coral that disappears at high tide, and is only held in place by intersecting currents. Still, pretty cool.

The next day I tackled something more my style – kayaking and hiking. Fortified by a Japanese breakfast of rice, miso soup, fish and salad, headed over to another little B&B called Monsoon who run excursions. Stocked up on supplies of my favourite rehydration tonic – Pocari Sweat – under the watchful (but sleepy) eye of one of the locals. Still haven’t found out what type of animal a Pocari is, or how you’d harvest it’s sweat (or why it tastes so good 😁) 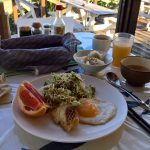 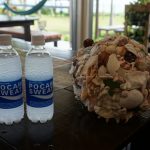 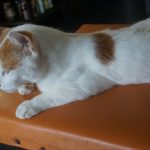 We would be kayaking up a river from the coast, then hiking through mangrove forest to the Pinasaira falls. The interior of Iriomote is 90% forest, and gets plenty of rain. There are 7 species of mangrove tree in Japan – and Iriomote is the only place where you find all 7 of them. We started with a 10 minute walk to the river, then a half hour paddle upriver to the start of the hike proper.

On disembarking, we spotted some weird piles of spheres made out of the sandy mud – like massive wormcasts. Turns out, there’s a variety of lobster that lives in burrows, only emerging at night to hunt for food – our guide Masa said they’re about 15 centimetres long, and very tasty if you can catch them! 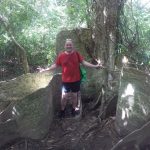 So then began our trek. First a photo op next to one of the oldest trees on the island. According to our guide, it’s over 200 years old, and can be dated by counting the growth bands on the weird vertical root structures. Apparently the locals used to cut these up and make chopping boards out of them. 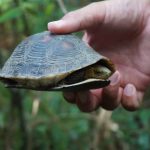 Our walk took us up around 250m to the top of the falls. On the way there and back we were lucky enough to see two rare species – a box turtle (who wasn’t too pleased at Masa picking him up so we could see how well he fitted into his shell), and a type of centipede which is apparently quite venomous and can give a nasty bite. It was nearly a foot long. 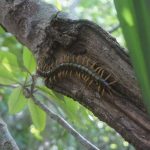 It was chilling out on an overhanging tree trunk, which my companions ahead had all put a hand on as they ducked down. They were somewhat surprised when I pointed out what almost happened to them…

The view from the top was well worth the sweat: 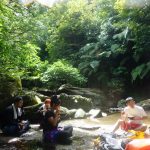 Lunch – lucky for some!

We had a packed lunch at the top of waterfall, karaage chicken and onigiri (hand sized rice triangles wrapped in nori (seaweed), usually with a filling). I’m still getting used to the filling we had – umeboshi, or pickled salted plums, a weird combo of fruit, vinegar and salt. Other groups had ramen – hot noodle soups, prepped on camping burners. 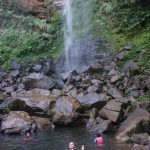 Time for a swim

It was quite breezy at the top near the cliff edge, and the water was being blown around as spray. I’ve never seen a waterfall with its own rainbow before. We hiked back down, heading for the pool at the bottom of the falls – cool water has never felt so good!

And now a large media gallery, took a lot of photos on the way up and down. 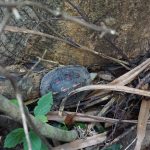 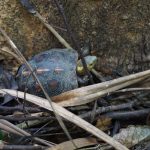 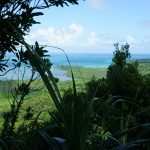 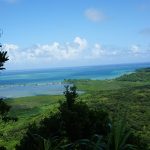 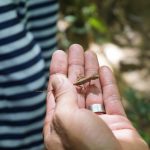 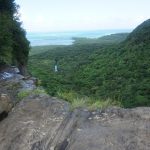 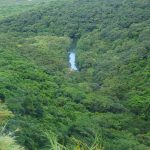 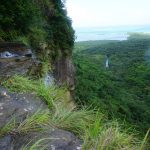 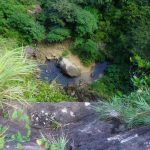 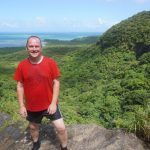 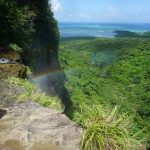 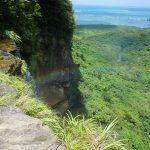 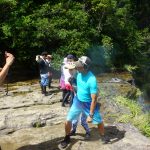 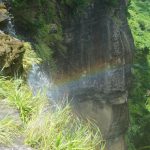 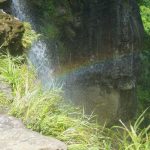 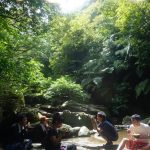 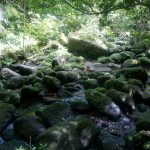 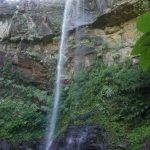 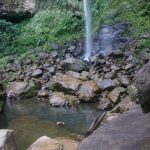